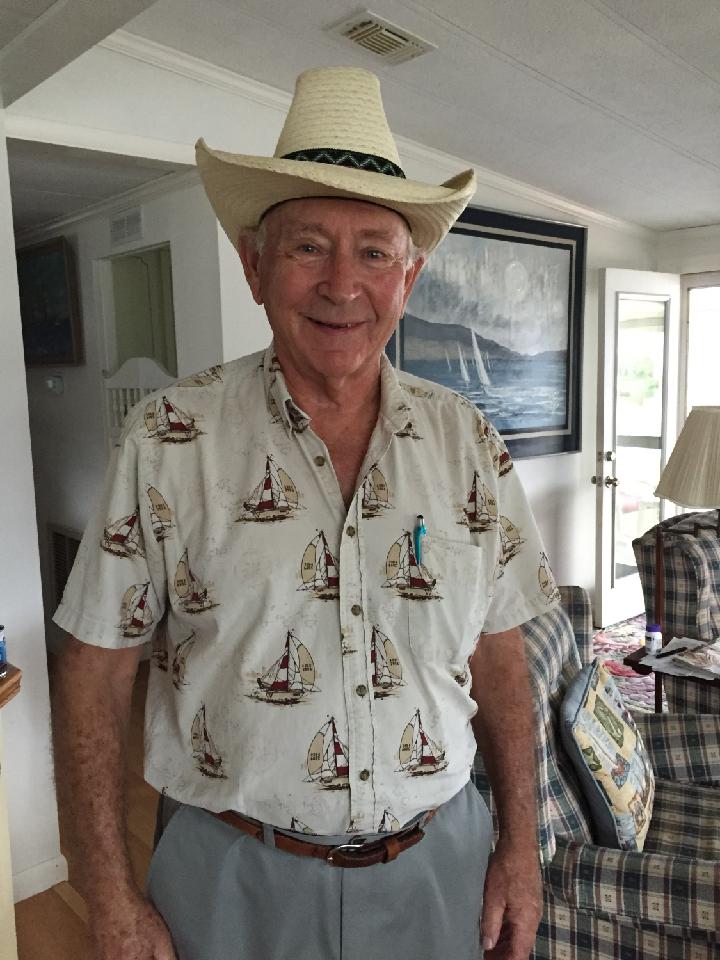 To begin with, David leaves us this message which his friends will appreciate: “Please don’t weep for me – I had a wonderful time!”

David had a lifelong love of boating and would often paraphrase Kenneth Grahame‘s classic The Wind in the Willows:  “Believe me, my young friend, there is nothing–absolutely nothing–half so much worth doing as simply messing about in boats.” A member of Shennecossett Yacht Club for 55 years, he served in many capacities. David also restored several wooden and fiberglass boats. Most notable was “Luau,” a 36-foot wooden sloop, after its hull received significant storm damage.  At the 1983 Mystic Seaport Wooden Boat Show, “Luau” received a trophy for “Most Improved.”

David received a mechanical engineering degree from what is now UMass Dartmouth in 1956. He was employed by the Department of the Army at Springfield Armory, holding positions in weapons design, analysis, and project management. He was awarded a patent in the gun mechanism field while at the Armory and maintained his Massachusetts Registered Professional Mechanical Engineer certification until retirement. When Secretary of Defense McNamara closed the Armory in 1967, David transferred to the department of the Navy with the Supervisor of Shipbuilding Conversion and Repair at the Electric Boat Division of General Dynamics. Receiving an MBA from University of New Haven in the mid-1970s, he held several positions including providing contract administration, design review, and management positions in engineering, quality assurance and material supply.

Additionally, David enjoyed white tailed deer hunting, salt and freshwater fishing, as well as many years of motorhome travel. Retiring in 1988, he joined his wife’s antique business traveling throughout New England and Florida for 19 years until her passing in 2007. He continued the antique business until 2019.

David is survived by a son Daniel Norman Poole (Michelle) in CT, a daughter Elizabeth Marie

Bailey in FL, a niece Valerie Dawson in Arizona, and 3 grandchildren, Steven Bellefleur in FL, and Victoria Poole and Daniel David Poole both in CT.  He was predeceased by his wife Joan Barrus Poole of Athol MA, his sister Marlene Dawson of Wallingford, VT and grandson, Michael Bailey of WA.

At this time, no memorials or services are scheduled, per David’s request.